3 Books to read this Summer

34
Is there anything better than relaxing at the beach and reading a good book? I have already answered that question in my latest post about my holiday in Croatia, for me there isn't. Whenever I go on holiday I spent hours at my local bookstore looking for the best holiday reads and I often search websites such as goodread to find new inspiration. For this year's holiday I settled on three books that were all quite different from one another. One was the sequel of the highly discussed novel 'Me Before You', another one a novel written by Nicholas Sparks that was said to be a thriller rather than a romantic novel and for my third book, I opted for a classic - 'To Kill a Mockingbird', a book that had been on my book bucket list for a very long time. So if you are still searching for some book inspiration, this post is for you and I can assure you that these three books will make your holidays even better. x 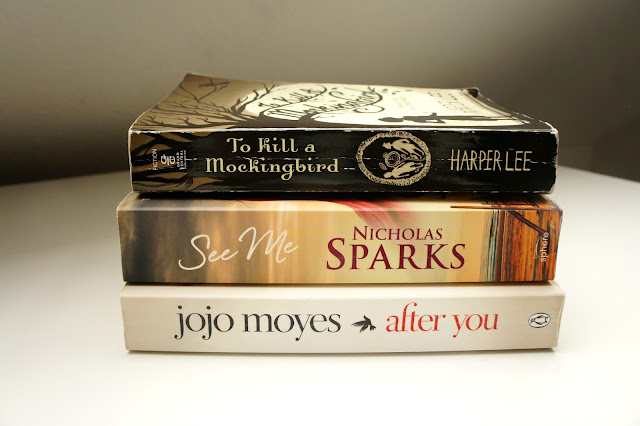 After You - Jojo Moyes

The Sequel of 'Me Before You' that is just as inspiring and beautifully written. If you haven't read 'Me Before You' then skip this review and read if first, it is an incredible novel that will leave you in tears and that will certainly never leave your mind. 'After You' is - obviously - about the main character of this series, Lou Clark who finds herself stuck in a dark place after the death of Will and therefore after failing to change his mind. Being stuck in her anger and grief Louise never manages to feel at home in her new flat and in spite of her promise to Will to explore the world around her she seems to be doing the opposite, working at an airport bar without ever going off for an adventure herself. One night though, everything changes and an encounter with a stranger turns Louise's world around leaving her with even more unanswered questions. While Louise's life starts to gain a new purpose a new man enters her life - but even though Louise can't get her mind off him, her past seems to be getting in the way and she appears to be unable to let go of it. I would go into more detail but I don't want to give to much away, just buy the novel and find out yourself. 'After You' is definitely a page-turner and it will leave you thinking about it before going to sleep. It will inspire you and provoke you to think about topics like grief, the purpose of life etc and it will evoke all kind of emotions, so keep your tissues ready.

I don't know about you, but whenever I go on holiday, I usually bring at least one Nicholas Sparks novel with me. So when I saw 'See Me' at my local bookstore I just couldn't resist. It didn't sound like a typical novel by him, though, which only heightened my interest to be honest. And when I googled reviews I found out some people classified it rather as a thriller than a romantic novel and I can agree with that, although it is a great mix of both. But let's get to the point: 'See Me' is about a 28 year old man called Colin Hancock who is trying to leave his troubled past behind by focusing on his teaching degree and by avoiding places of potential fights at all costs. He never planned on getting involved in a new relationship but when Maria Sanchez enters his life, his life is turned upside down and he simple can't seem to resist her. Maria Sanchez has formerly worked in the field of criminal law and has experienced a troubled past as well due to her profession. While the couple is still getting to know each other Maria suddenly starts to get threatened again and while trying to protect his girlfriend Colin's past seems to catch up with him, pushing him to a breaking point. Another page-turner that I couldn't lay down once I started reading. This really isn't a typical Nicholas Sparks novel but that doesn't make it any less worth reading, in contrast: 'See Me' is incredibly gripping and it deals with topics such as stereotypes, human flaws and unconventional love. I personally love how Nicholas Sparks combined aspects of a thriller with a romantic novel and I'm sure you will do too.

To Kill A Mockingbird - Harper Lee

A book that I have wanted to read for a very long time and a book that is often talked about. And that is for a very good reason. Since I read this book I kept recommending it to all my friends and family as it is an absolute must-read. 'To Kill A Mockingbird' describes the childhood of Jean Louise (or better known, Scout) and is narrated from her perspective. Through her eyes she describes her upbringing in a small town in Alabama that appears rather sleepy and peaceful until it is rocked by a crisis, a crisis that outlays the flaws of society and its traditions and prejudices. Scout's father, a liberal and wise man who stands in for equality and human rights is confronted with the traditional and often racist beliefs of society and suddenly seems to become a target himself. Through children's eyes the reader learns about the roots of human behaviour, morals and prejudices and how children are influenced by society. A deeply moving and inspiring novel that will make you rethink your values and that will make you laugh and cry at the same time. And one thing is certain: Once you have started reading this book it will never leave your mind again. And that's great as the novel contains such an important message: It urges us to think for ourselves, to think outside the bounds of society and to stand in for our beliefs - this way we can change society, slowly but surely.


Have you read any of these books? Are there any other books you would recommend? x